Finally after a lot of time craving about doing one of the best scrambling in the whole UK, I decided that shit weather wasn’t going to stop me and at least the forecast was dry for today. I will be joining Bristy and Gribin ridge to Tryfan to complete the horseshoes circuit. It took me 7,5h to complete the almost 8km circuit.

The path begins at the lay-by on the A5 by Ogwen lake. After crossing a gate for the cattle, you have to stick to the left side of the wall. Just before reaching the 400m (altitude) the path turns slightly east and carries on straight up. Soon after this you will come across the first scramble bits. There is not just one route, you can do your own, the more you stay at the crest of the ridge the better. At this point I caught up with Jess and Toni (sorry if spelling is wrong) who asked if I wanted to go ahead, but I felt quite comfortable following somebody specially in this condition. We ended up doing the whole ridge together.

The possibilities are endless, and the scramble is amazing, no very exposed and there seems to be the perfect holds every time you need them. We were taking it very easy and after 2h we arrived at the Cannon Stone, very famous feature on the route.

After the mandatory photos at the top of the Cannon, we continued on its east side till a very prominent shoulder where we stayed in the path that goes around instead of climbing it. It looked amazing, but it would be for another day.

The path took us a bit beyond Adan & Eva where we had to find the way around and reach it from the back to climb these two rocks that are at the summit of Tryfan. The rock had been surprincily grippy for the wet conditions all the way up here, but this last section was very slippery and nobody did the typical jump from one to the other.

It was really hard to find the way down and the slippery rock didn’t help either. We had spent so much time on our way up due the poor visibility and conditions that it became late for my companion and when we got to the heather terrace (very well marked path running on the east side of the mountain) we said goodbye and I continued on my own.

Navigation was being so difficult and for a period of time I forgot I was meant to be doing scrambling and found myself walking on the side of Glyder Fach following a bearing to its summit. Then I had the very stupid idea of cutting across to find the scramble line that comes on the crest of the ridge. Oh boy what a mistake!! It all began with a very steep slope almost crawling on scree and then lose rock with patches of wet slippery grass to finish at the top of a vertical cliff where I couldn’t carry on ahead nor back (unless getting rope and harness out) and the only way was to go round a few spikes and pray it was doable at the other side, the sketchy terrain continued upwards and I am sure it was beyond scrambling, as it was very exposed, shit terrain and awkward movements. Luckily after a couple of very scary moves, I joined the so desired scrambling line and soon after the summit of Glyder Fach.

Wind was picking up, the low cloud here was very wet and after the scary time I just wanted to get off the mountain and sit in the van, but the very poor visibility made navigation a nightmare at times, specially when finding massive boulders that either you go round them or play your luck with your ankles going through them. I passed the Cantilever and the Castle Y Gwynt almost completely hidden by the cloud and I knew the last ridge was very close. 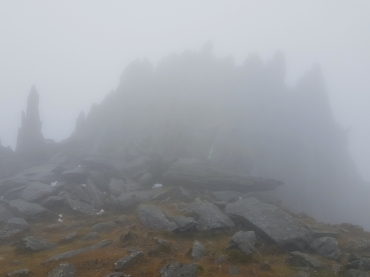 I saw a kind of track that matched with my bearing down the last ridge and didn’t hesitate to follow it. I don’t think I did the line for the ridge, but I was tired and anyway I don’t find going down as appealing as going up, so it was fine to me. The path I was following finishes at the Cottage, but I managed to find a little deviation heading to my car park that ended up being a nightmare terrain of muddy bog, although the last section is a path made with big stones.

It was a hard day and the same as the day before, navigation was essential. For this day I carried 30m rope, harness and a selection of slings in case I became lost or stuck and needed to abseil to safe terrain. I almost needed them, but fortunately it was just a good story to tell in the pub. When going out specially on bad conditions be prepare in case anything goes wrong and if unsure, don’t risk it, leave it for another day.