There are several routes you can take to get to the summit; from the very easy, well marked and popular Miners’ path to the most technical walk along the ridge and not for everybody Grib Goch! For those unable to walk it or those just feeling lazy there is a train to the top (Weather permitting). 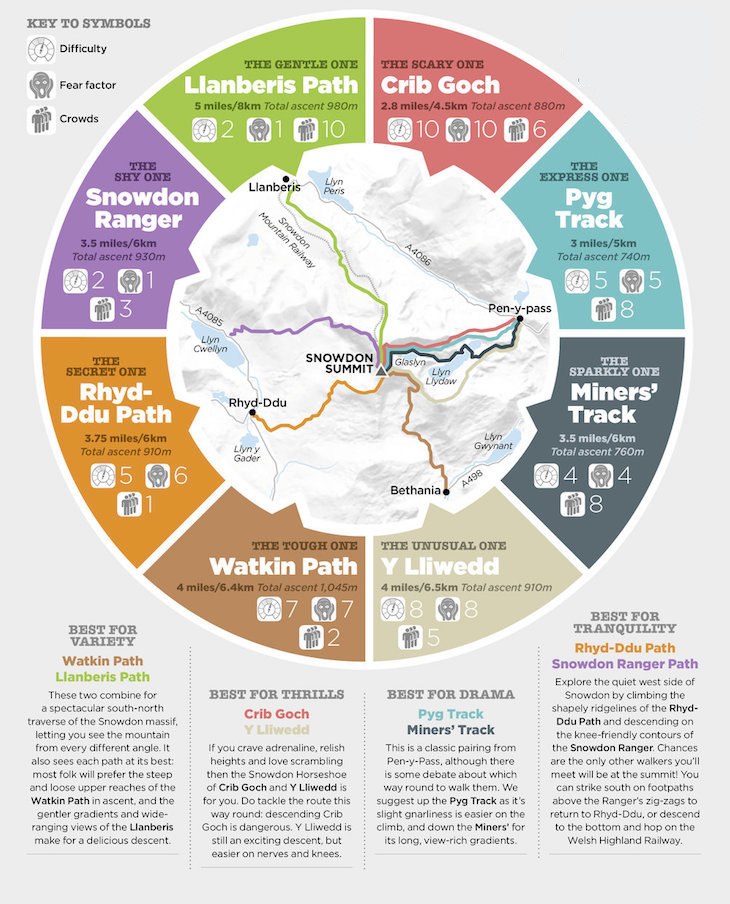 We recommended you get to Pen-Y-Pass carpark very early, especially in summer as there are very limited spaces and although the price is a rip off (£5 for 4h, £10 for the whole day) the parking is always rammed. The car park can be paid by cash or card. There you will find toilets and there is a cafe across the road where you can buy some food. The opening hours vary.

Today I will explain how I reached the summit via the Miners’ path in snow, in winter.

* Please be aware all the distances and times are approximate. *

I left the carpark at around 7:45 heading to the main gate to access the walk. Just after passing the gate there is a board with the expected weather conditions and recommendations for the day. That day I didn’t have a look, but the day before it was advising the use of crampons and ice axes as well as saying that the temperature on the top felt like -14.

I had a pretty active pace going that day and in 45 min I had covered the first 2.5km to the big lake. Just before crossing between the two lakes leading up to Snowdon you can see on the left the deviation to Y Lliwedd path. I was tempted to take that path having done it in the past but the lack of visibility changed my mind.

You pass and follow the lakes round till you get to the ruins of the old mine. There you will see some old buildings and machinery. Up to that point the path is a 4×4 track that is easy to follow and even has tarmac along some parts of it, climbing steadily uphill. From here the track changes into a stone set path. It is still very easy to see and to follow. Here the ascent noticeably increases for 2km until you reach the top lake that feeds the two lakes you passed previously.

The top lake is at the bottom of the main ascent to the summit and the point where the track becomes a mountain path. This is a good place to have something to eat putting an extra layer of clothes on and changing from walking poles to ice axe! From this point the snow was quite deep and the ascent in some places is quite steep.

After around 300m and 120m in altitude gain you reach the Pig’s path which runs in parallel to the miners path but at a different height. The path should still be well marked. However visibility that day was really bad and snow had fallen overnight causing the walk to get more challenging. At times it required getting the compass out and working out the bearings as I was the first going up that route that morning. Fortunately I had been there the day before and the landscape was familiar. The route is not hard to navigate as it is pretty much straight till you get to around 5.6km. There you meet a little wall that supports the land, creating a couple of zig zags before heading to the top.

Here was where I decided to put the crampons on. The snow was starting to get hard and deep and the path was getting narrower. Less than 1km after you reach the ridge (which that day had accumulated chest high snow which was a bit of a nightmare to get through! But good fun!) the conditions changed dramatically, the wind was blowing very hard, the temperature dropped considerably and the snow became ice.

Here was where I first bumped into people that were arriving from other paths. From this point the summit is less than 1km away heading southeast along the ridge to the summit, where you will find a set of stairs to the very top. It was 6.8 km to a height of 1085m that I covered in just 3hours.

After reaching the top, I went to the building where the train departs and where the cafe is (closed during winter) to have a cup of hot chocolate and something to eat. What a nice surprise finding a bunch of Welsh guys singing Xmas carols in Welsh and drinking mulled wine!

The job was done and pata was waiting for me at home having sat out for day 2 on Snowdon so the way down I was almost flying! Nothing remarkable to add more than I reached the Miners’ path again with a small deviation as you can see on the map and that people were starting to arrive to do the walk as I made my way down.

It was a total of 13.76km that took me 4h 50min with an altitude gain of 1012m. The conditions weren’t too bad, but you definitely need some gear and some knowledge in that weather. It was scary seeing how many people were doing the walk without proper gear, I’m not just saying axes or crampons, I came across people without a backpack, without a waterproof jacket, in trainers… accidents happen… some times for a reason.